Isopogon latifolius is one of the western species. It is a shrub to about 2 metres high by a similar width. The leaves are leathery in texture and elliptical shaped to about 100 mm long. The large pink to mauve flower clusters occur at the ends of the branches in spring and are very spectacular, being around 70-80 mm diameter. They are followed by spherical seed pods which remain on the plant for an indefinite period.

Like many western species, I.latifolius is not regarded as suited to humid climates. It performs best in areas with dry summers and well drained soils. A sunny position will produce the best flowering. It will withstand light to moderate frosts. The species makes an excellent, long-lasting cut flower and is being commercially famed in suitable climates.

I.latifolius is usually propagated from seed which germinates readily without pretreatment. Cuttings using firm, current season’s growth may be successful but the strike rate may not be high. Some limited work has been carried out by enthusiasts on the grafting of western species of Isopogon onto eastern rootstocks to extend the range where the plants can be grown. It is not known whether I.latifolius has been involved in this work but experiments using I.anethifolius or I.dawsonii as rootstocks may be worth pursuing. 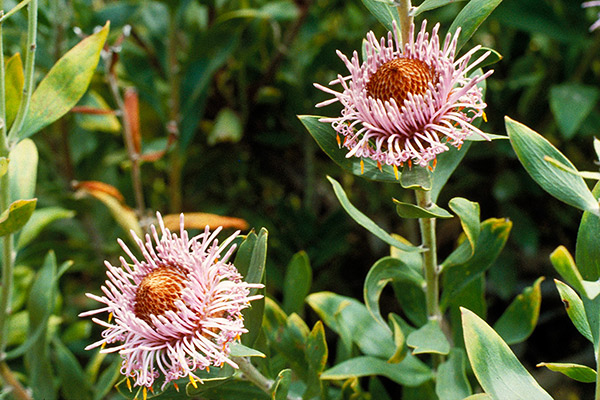