Lasiopetalum is a genus of about 35 species, all occurring in Australia with most being found in Western Australia. The genus is closely related to the better known Thomasia, Guichenotia and Lysiosepalum. They are generally small to medium shrubs in which the calyx of the flower is more prominent than the petals.

Lasiopetalum ferrugineum is a small to medium shrub which varies from almost prostrate in habit to a rounded bush about 2 metres tall. There are two recognised varities:

The small, rusty coloured flowers occur in late winter and spring and are relatively inconspicuous. The flowers are followed by capsules containing black seeds which are shed from the plant when ripe.

L.ferrugineum is not a particularly popular plant in cultivation. It is not especially ornamental but the rusty new growth is a pleasant contrast to the dark green foliage. The foliage often has a drooping habit that gives the impression that the plant is suffering from a lack of water. The plant is hardy in reasonably drained soils in a sunny or semi-shaded position.

Propagation can be carried out from seed but this is rarely available. Cuttings of firm, current season’s growth usually strike reliably. 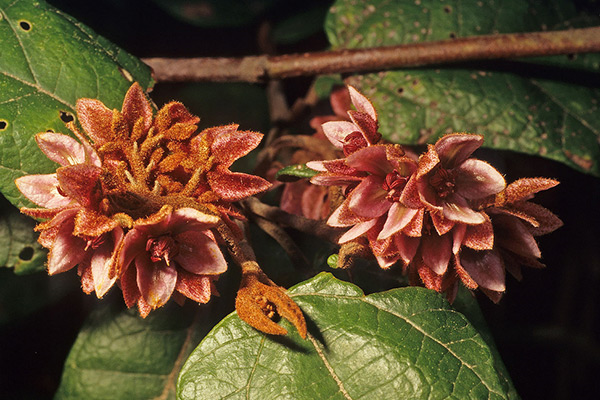