Lechenaultia is a genus of about 30 species of small, shrubby or herbaceous plants. Most are found in Western Australia. The best known is L.biloba, the blue lechenaultia which is commonly cultivated in many areas of Australia.

Lechenaultia tubiflora is usually 0.5 m or less in height, spreading to about 1 metre in diameter. The branches are twiggy with linear, narrow leaves to around 15 mm long.

The 5-petalled flowers are unlike other members of the genus, which generally have a very open shape. With L.tubiflora, the petals are compressed into a tight tube about 15 mm long. The flower colour is quite variable and may be white, yellow, pink or red, with the paler coloured forms often having a pink or red tip, as seen in the accompanying photo. Flowering occurs in late winter through to summer.

As a native of south Western Australia, L.tubiflora prefers climates with dry summers. It has been in cultivation for many years but is difficult to maintain for more than two or three seasons. It requires well drained, moist, sandy soils and a sunny location. It can be grown in a container.

Propagation of L.tubiflora is difficult from seed but cuttings strike very easily from firm, current season’s growth. This means that the plants could be treated as annuals with replacement plants available when older ones die. 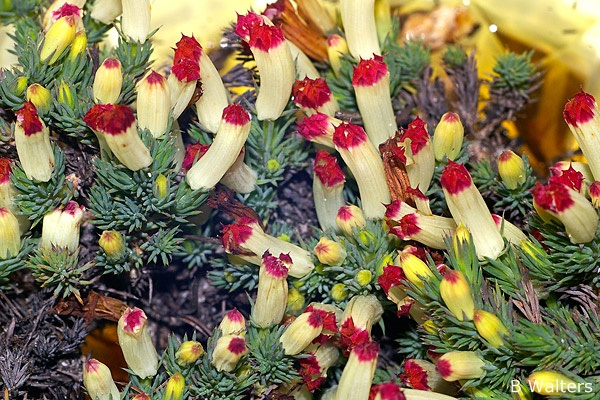