The genus Leionema comprises 22 species which were previously part of the genus Phebalium. All are endemic to Australia and occur in the eastern half of the continent. Most are small shrubs with very aromatic foliage and produce clusters of small, star-like flowers in the cream to bright yellow range.

Leionema carruthersii is a small shrub up to about 1 metre in height. It has oval to lanceolate leaves up to 100 mm long and 5 mm wide with recurved or revolute margins. Together with a few other members of the genus, L.carruthersii is unusual in that it has flowers with prominent stamens which project well beyond the length of the floral tube. In most other species the stamens are shorter and more spreading to give a starry appearance to the flowers. The small flower cluster consist of up to 10 flowers on short stems from the leaf axils. They are yellowish-green with red stamens and surrounded by green bracts. Flowering occurs mainly in spring but flowers may be present at other times.

Because of its rarity, Leionema carruthersii is rarely seen in cultivation but it would make an interesting small shrub for sunny, well drained positions.

In common with most members of the Rutaceae, propagation from seed is difficult but cuttings usually strike readily. 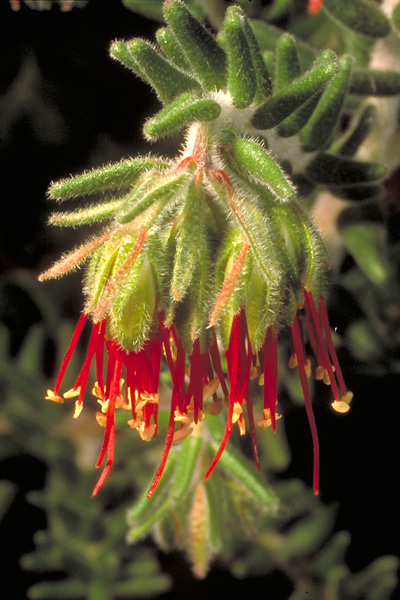