Like most of Australia’s members of the Ericaceae, Leptecophylla belongs to the subfamily Epacridoideae, which was formerly classified as a separate family, the Epacridaceae. Leptecophylla consists of about 13 species which were formerly classified in the genus Cyathodes. The genus occurs in Australia as well as New Zealand, Papua New Guinea and some Pacific Islands.

Leptecophylla juniperina is a densely foliaged shrub with prickly leaves up to 16 mm long (less than 6 mm long in subsp. parvifolia). The white flowers are tubular and about 5 mm long, occurring in the leaf axils towards the ends of the branches. Flowers are generally seen in winter and spring and are followed by deep pink fleshy fruits (drupes) about 10 mm in diameter. The fruits are edible.

L. juniperina is not widely seen in gardens and is likely to be slow growing in cultivation. It should prefer a well drained, protected position in semi shade. Like most members of the Australian heaths, L. juniperina should be an excellent species for growing in a container.

Propagation should be possible using cuttings of firm current season’s growth. Seed is rarely available, if at all, and germination success is unknown. 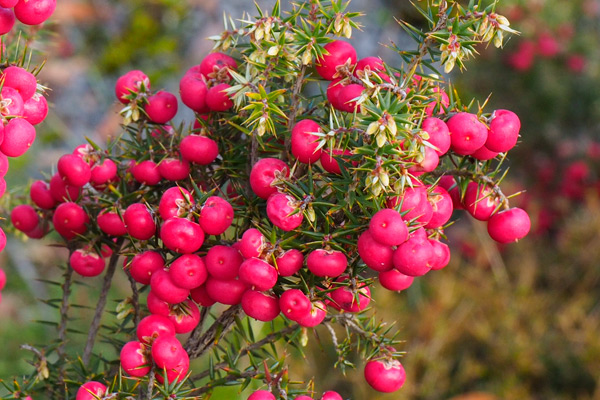