Leptospermum ‘Pink Cascade’ is an attractive, small shrub with a weeping habit. It is believed to be a hybrid between L.polygalifolium and L.continentale. It is similar to other cultivars of L.polygalifolium such as ‘Pacific Beauty’ and ‘Cardwell’ except for the pink (rather than white) flowers. The 5-petalled flowers are fairly typical of the genus being circular (about 15 mm diameter) with numerous small stamens surrounding the central stigma. Flowers which occur in late spring to early summer are followed by small, woody fruits containing many seeds.

Leptospermum ‘Pink Cascade’ has become very popular in cultivation because of its growth habit and flower colour. It is tolerant of a range of soils but performs best in moist, well drained soils in full sun or light shade. It is not attacked by many pests and seems fairly resistant to webbing caterpillar which can cause serious disfiguration to some Leptospermum cultivars.

Propagation is easy from cuttings. It produces viable seed which germinates easily, however because of seedling variation, any plants produced from this seed will not be identical to the parent plant. 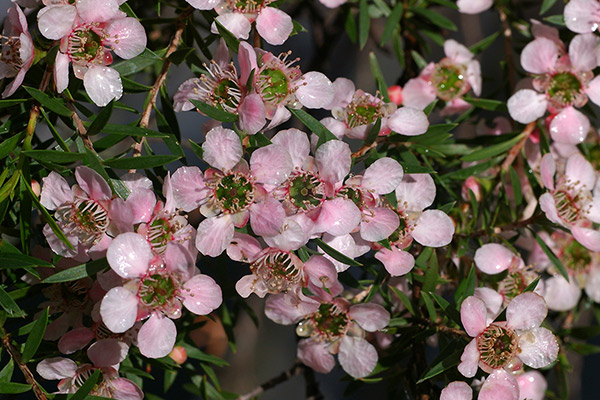