Like most of Australia’s members of the Ericaceae, Leucopogon belongs to the subfamily Epacridoideae, which was formerly classified as a separate family, the Epacridaceae. Leucopogon consists of about 160 species, mostly Australian but some are also found in New Zealand and in islands to the north of Australia. They occur in a variety of habitats from sub-alpine areas to coastal heaths.

There are two varieties of Leucopogon lanceolatus recognised; var.lanceolatus and var.gracilis. The latter occurs in south-east Queensland and northern New South Wales and differs from the more common form in having smaller leaves and branches with fine hairs.

L.lanceolatus is a medium to large bushy shrub, usually 2 to 3 metres high but occasionally higher. The lance-shaped leaves are about 2-8 cm long with several distinct veins. Flowering is usually in spring and the small, white flowers are about 4 mm long, occurring in racemes of up to 10 or more flowers. As is typical of the genus, the flowers have hairy lobes.

Few leucopogons are seen in cultivation, mainly due to difficulties in propagation and those that have been cultivated have proven to be difficult to maintain. L.lanceolatus is more successful in cultivation than most other species but even it is rarely seen in gardens. It seems to prefer a moist, well drained situation in semi shade.

Propagation of L.lanceolatus is difficult. Germination of seed is usually slow and unreliable using conventional methods. Cuttings are also unreliable and may produce a limited success rate. Cuttings of firm current season’s growth are likely to give the best results and use of a root-promoting hormone is advisable. 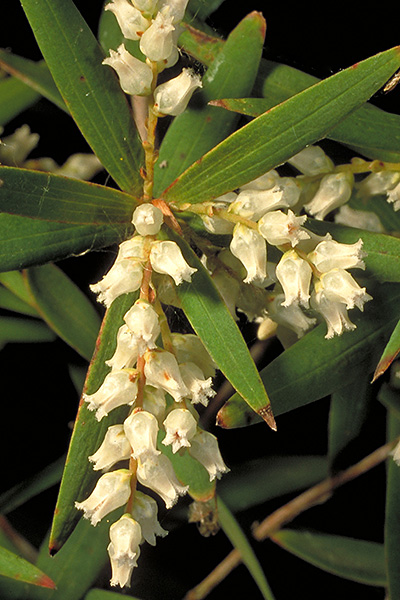