The kangaroo paws comprise a small group of 11 species in the genus Anigozanthos and a single species in the genus Macropidia. They are perennial herbs consisting of strap-like leaves arising from underground rhizomes. Flowers occur in clusters on stalks which emerge from the bases of the leaves. A number of species die back to the rhizome in summer, regenerating in autumn. All species are restricted in distribution to the southern areas of Western Australia.

Macropidia fuliginosa is a spectacular species. The individual plants consist of blue-green strap-like leaves 20 to 50 cm in height. Flowers occur in spring and summer on branched stems to a metre or more high and are greenish-yellow with black, soot-like hairs. Black hairs also occur along the stems.

The black kangaroo paw is a very desirable plant for cultivation but cannot be regarded as hardy in humid climates. In those areas it can be grown for a few years in a container in a sunny position. In more favourable (dry summer) climates it performs best in lighter soils, such as sandy loam. The plant is susceptible to fungal disease such as “ink spot”, which is first seen as small black spots on the foliage which gradually spread and kill the plant. This is a difficult disease to control but the chance of it occurring is minimised by avoiding watering leaves or watering in the early morning so that moisture can quickly evaporate.

Seed of M.fuliginosa does not require any pretreatment but germination is not reliable. The fact that plants occur naturally in areas where bushfires are relatively frequent suggests that it might be worth treating seed with smoke or smoke water prior to sowing. The species is commonly propagated commercially by tissue culture. 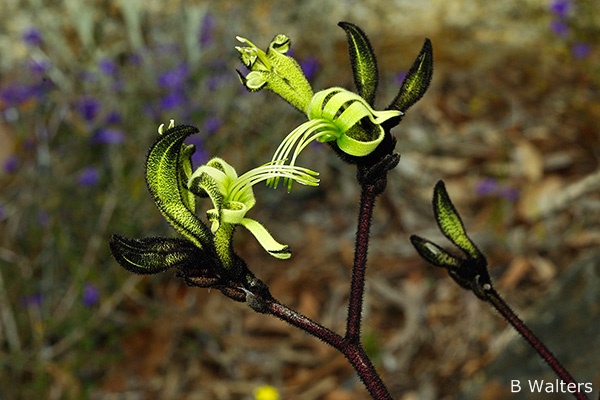