Melaleuca huegelii is a common plant in cultivation among Australian plant enthusiasts but it has not spread into general horticulture to the extent that it deserves.

Two sub-species of Melaleuca huegelii are currently recognised; ssp. huegelii (shown in the photo) and ssp. pristicensis. Both are medium to large shrubs, generally 3-4 m in height. Ssp.pristicensis is found in the northen part of the species’ range around Shark Bay on the central Western Australian coast. It differs from ssp.huegelii in having mauve to pink flowers rather than white.

The flower clusters of M.huegelii are of “bottlebrush” configuration, 50-75 mm long and well displayed towards the ends of the branches. The pink flower buds are also an attractive feature of the plant. Flowering occurs in early summer.

The leaves are very small and crowded against the stems in a scale-like configuration.

Although native to a dry summer climate M.huegelii has been grown successfully in the wetter summer conditions of Australia’s east coast in well drained, sunny positions. The species responds to annual fertilising after flowering and to an annual light pruning to encourage a bushy shape. 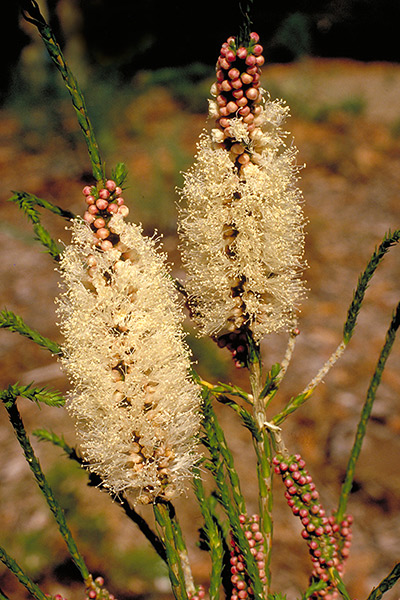