Melaleuca hypericifolia is one of the most commonly cultivated members of the genus. It is a small to large shrub which usually grows to about 2 metres in cultivation although it sometimes grows larger in its natural habitat. A recently introduced semi-prostrate form is known as “Ulladulla Beacon”.

The plant often has a weeping habit of growth and develops slightly papery bark as it matures. Leaves are up to 50mm in length and usually decussate (arranged in opposite pairs). The bottlebrush-type flower clusters are around 60 mm long by 50 mm in diameter and occur in short stems off the older wood. This means that many of the flowers may be concealed within the bush. The flowers are deep red to orange in colour. These are followed by cylindrically arranged seed capsules which are persistent on the plant. The capsules contain numerous fine seeds.

The popularity of M.hypericifolia has caused problems in some areas where it has tended to become weedy in natural bushland. Care should be exercised in cultivating the species in southern Victoria.

M.hypericifolia is a hardy plant in a wide range of climates. It grows successfully in both light and heavy soils and appreciates regular watering. It will even tolerate less than perfect drainage. A sunny aspect will produce the best flowering but the plant will grow in shady areas. Plants can be severely pruned to near ground level if rejuvenation is required but regular, light pruning is preferable to maintain a bushy shape. Birds are attracted to the flowers.

Propagation is easy from both seed and cuttings. Particular forms must be propagated from cuttings to ensure that plants true to the parent are obtained. 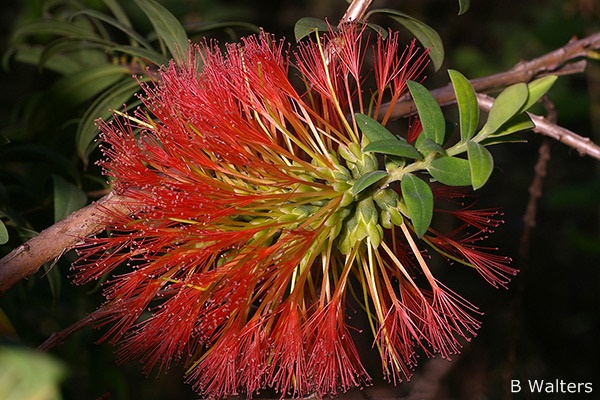