Myoporum is a genus of about 30 species, of which sixteen are found in Australia. M.floribundum is perhaps the best known in cultivation. It is an open shrub to about 2.5 – 3 metres tall with warty stems. The narrow leaves (up to 10 cm long) hang down from the stems in a fairly distinctive nature (although Myoporum bateae sometimes has a similar habit). The white flowers occur in clusters from the leaf axils, mainly in spring. Individually the flowers are small (5 – 6 mm diameter) but they are usually profuse, giving the plant the appearance of being covered in snow. The flowers are perfumed.

Myoporum floribundum has been in cultivation for many years and has proved to be reliable in temperate areas in a sunny or semi-shaded location. It is drought tolerant once established (although it may take on a wilted appearance under such conditions) and is frost tolerant. The plant resents pruning once mature so light pruning to shape in its early stages is preferable.

Propagation from seed is usually successful without any pretreatment but germination may be slow. Cuttings of hardened, current season’s growth strike easily and this is the preferred method of propagation. 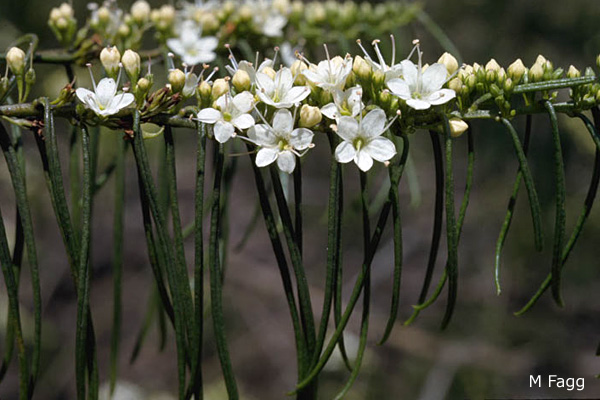