Nematolepis is a small genus of 7 species, six of which were previously included in the genus Phebalium. Most are small shrubs with very aromatic foliage and producing clusters of small, star-like flowers. Similar genera include Phebalium, Leionema, and Rhadinothamnus. Nematolepis squamea was previously classified under Phebalium as Phebalium squameum.

Nematolepis squamea is a large shrub or small tree up to about 10 metres in height but often smaller in cultivation. The leaves are elliptical in shape to about 80 mm long by 20 mm wide, glossy green above and silvery below. The individual white flowers are five-petalled and relatively small but they occur in clusters of up to 20 and are reasonably conspicuous. Flowering usually occurs in spring.

This species has been in cultivation for many years and is reasonably reliable in well drained moist soil, preferably in semi shade. It should not be allowed to dry out as it does not seem to be tolerant of extended dryness. It is hardy to at least moderate frost.

In common with most members of the Rutaceae, propagation of N.squamea from seed is difficult but cuttings usually strike readily from current season’s growth. 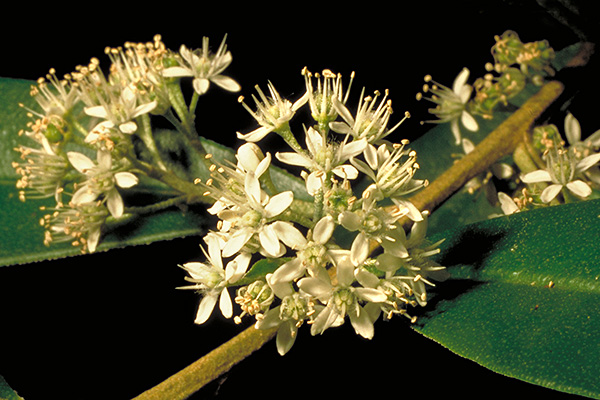