Most of Australia’s members of the Ericaceae belong to the subfamily Epacridoideae, which was formerly classified as a separate family. the Epacridaceae. Paphia, however belongs in the subfamily Vaccinioideae and is one of only three genera in that subfamily that are found in Australia, the other two being Gaultheria and Pernettya.

Paphia comprises about 23 species which occur in the New Guinea and South Pacific regions with a single species (Paphia meiniana) in north Queensland. The genus was previously a sub-genus in Agapetes (see footnote 2). P.meiniana was previously known as Agapetes meiniana and is still widely seen by its previous name in many publications.

Paphia meiniana is a shrubby, semi-climber with glossy, oval to lance-shaped leaves up to 70 mm long. The leaves have a pinkish tinge when new. The red or pink tubular flowers occur in the leaf axils and may occur at any time of year in its natural habitat. They have a waxy appearance and are bell shaped to about 30 mm long. Superficially the flowers are similar to the related Prionotes cerinthoides from Tasmania.

The species has proven to be very hardy even in cool climates but can be difficult to flower successfully in such areas. It is best grown in a semi shaded moist location protected from full sun. Its attractive foliage make it an excellent container plant and it can be grown successfully indoors.

Propagation is relatively easy from cuttings. Like all members of the Ericaceae, P.meiniana forms very fine roots which can be easily damaged on repotting. Striking cuttings in individual small tubes is recommended. Information on propagation from seed is not available.

2. New taxa in Paphia and Dimorphanthera (Ericaceae) in Papuasia and the problem of generic limits in Vaccinieae. Edinburgh Journal of Botany 60(03):267 – 298, November 2003. 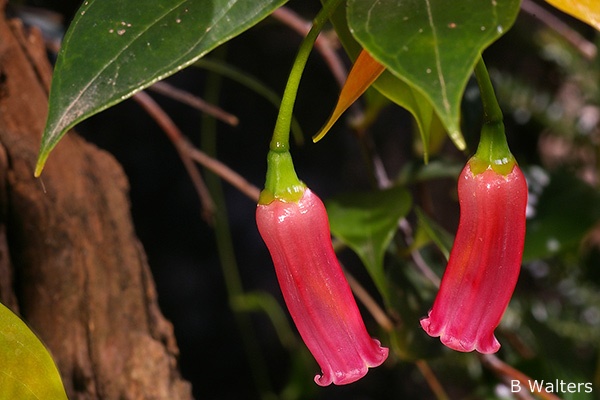