Patersonia is a genus of about 20 species, most of which occur only in Australia but some species are also found in the Philippines. Most species are found in south Western Australia. They are perennial herbs with ‘Iris-like’ flowers.

Patersonia sericea is one of the most commonly encountered species. It has narrow, linear leaves to about 20 cm long arising from a underground rhizome. The three-petalled flowers occur on stems which are shorter than the leaves. They are deep blue or purple (occasionally white) and usually occur in spring and summer. Before opening, the flowers are enclosed in two large papery bracts. Each flower only opens for a single day but new flowers are produced over an extended period. The flowers may close before noon in hot, sunny weather.

Patersonia sericea is an attractive species for the garden in a well drained, sunny or semi-shaded position with assured moisture. The species is tolerant of at least moderate frost.

Propagation is relatively easy from seed which does not require any special pre-treatment. Division of large plants is also a successful method. 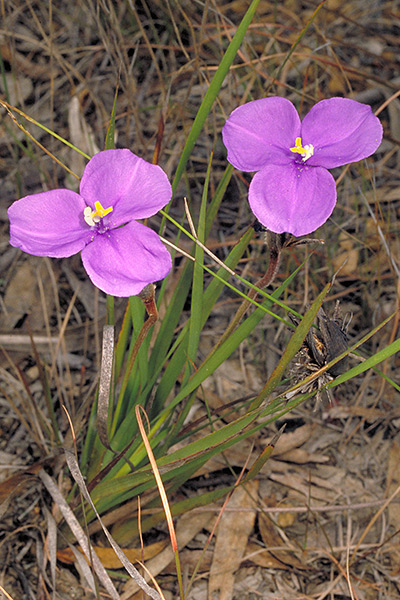