Phebalium glandulosum is usually a shrub from 0.5 to about 1 metre high (sometimes taller) with 4 recognised subspecies. It has stems and leaves that have prominent warty glands. The leaves are linear to cuneate (wedge shaped) from 5 to 25 mm long. The individual pale to bright yellow flowers are five-petalled with long stamens. They are relatively small but they occur in clusters of a dozen or more together and are very conspicuous. Flowering usually occurs in early spring.

P.glandulosum is not common in general cultivation and is grown mainly by Australian plant enthusiasts. It is a hardy and attractive plant for gardens in temperate and sub-tropical areas. It prefers well drained soils and withstands dry conditions once established. The plant performs best in a well drained, sunny to slightly sheltered position (but not dense shade).

In common with most members of the Rutaceae, propagation of P.glandulosum from seed is difficult but cuttings usually strike readily from current season’s growth. 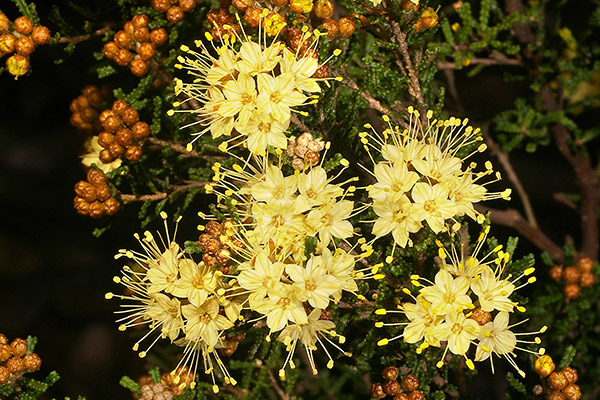