The genus Phyllota consists of 10 species, all of which are Australian endemics. They are small to medium shrubs commonly referred to as “bush peas”. Together with some related genera such as Dillwynia and Pultenaea they are also referred to as “eggs and bacon”, a reference to the yellow flowers with (usually) red markings.

Phyllota squarrosa is a small, erect shrub up to 1 metre in height. The linear-shaped leaves are up to 15 mm long with revolute (rolled downwards) margins. The flowers have the typical “pea” shape consisting of 4 petals; the “standard”, the “keel” and two “wings”, as shown in the diagram. The yellow or orange flowers are longer than they are wide (about 12 mm long by 7 mmm across), which is typical of most species in the genus. Flowering is mainly in spring but it may extend into summer. The flowers are followed by small seed pods containing one or two seeds.

Phyllotas, generally, are not often seen in cultivation and P.squarrosa is no exception. It should be suited to well drained soils in a sunny or semi-shaded position. It is tolerant of at least moderate frost.

Propagation would be expected to be easy from seed following pre-treatment to break the physical dormancy provided by the impervious seed coat. Pre-treatment can be carried out by abrasion or by the use of boiling water (further details can be found in under the “Propagation” tab of the “Pea Family” page). The seed retains viability for many years. Propagation from cuttings should also be successful using firm, current season’s growth. 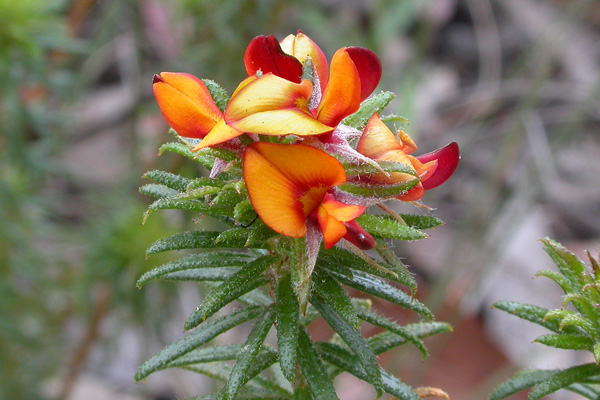