Regelia is a small genus of 6 species, 5 of which occur naturally only in south Western Australia and one species in Kakadu National Park in the Northern Territory. All species occur in well-drained sites – on sandplain, woodland or rocky hillsides or escarpments. The genus is closely related to the more familiar Melaleuca, both genera having stamens which are joined into clusters. The difference between the genera is in the arrangement of the anthers (the pollen bearing structures of the flowers). In Regelia these are attached to the stamens at their bases (basifixed) whereas in Melaleuca the anthers are attached along their sides (versatile). Other genera closely related to Regelia include Beaufortia, Calothamnus and Eremaea.

Regelia cymbifolia is a bushy, erect, many-branched shrub to a height of about 2 metres. The ovate leaves are usually less than 4 mm long and tend to be recurved with a prominent main vein visible on the underside of the leaf. Deep pink to purple flowers are produced in small terminal clusters in spring. Following flowering, seeds develop in woody capsules similar to those formed with Melaleuca species. The seeds are retained within the capsules indefinitely.

Regelia cymbifolia occurs in a restricted area in south-west Western Australia in sand in sandplain or woodland . In the publication ” Extinct and Endangered Plants of Australia ” by J. Leigh, R. Boden and J. Briggs published in 1984 , R.cymbifolia was listed as threatened because most of its original habitat has been destroyed and only a few isolated roadside populations remained.

This species has not been widely used as a garden plant but apparently is in cultivation in Kings Park and the Perth Botanic Gardens where it is growing quite well. It has been grown by a few enthusiasts in the eastern states of Australia but little is known about its reliability in those areas. It requires a well-drained site in full sun for best results.

Propagation is reported to be easy from seed. Cuttings of hardened, current season’s growth should also be successful. 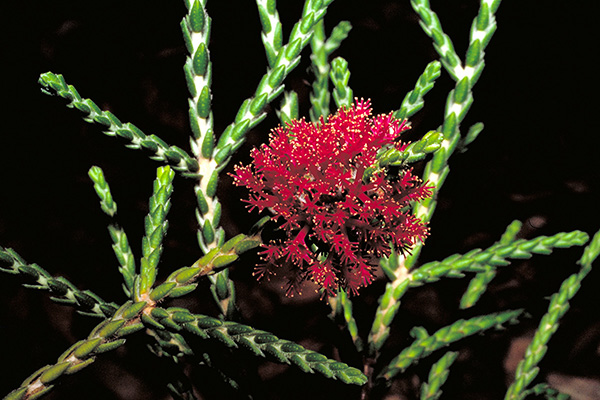