Rubus is a large genus of about 250 species found in many parts of the world. They are often known as brambles because of the rambling, prickly nature of the arching stems of some species. The best known members of the genus are probably the blackberry raspberry, loganberry and youngberry. The blackberry (Rubus fruticosus and related species) has become a serious weed in temperate parts of Australia because its seeds are spread by birds and the nature of the plant makes it resistant to control by grazing animals.

Rubrus nebulosus is a tall climbing plant with prickles on both stems and leaf stalks . The leaves are palmate in form (having leaflets similar to the shape of a persons hand), usually with 5 elliptical leaflets tapering to a point. Leaflets are about 50 – 100 mm long by 10 – 40 mm wide with toothed margins. The white, 5-petalled flowers occur in late spring and summer and are followed by the dark red fruits about 10 mm in diameter.

Although not as rampant as some other Rubus species, because of its habit, this is not really a plant for the small home garden. It is a hardy plant for larger properties in a sunny position and it responds well to pruning so it can be kept to manageble proportions if regularly maintained. It requires adequate water and well drained soils to perform well. The fruit is believed to be edible but its flavour is unknown.

The species can be grown from seed which does not require any special pre-treatment. However, germination may be slow. Propagation can also be carried out using cuttings of firm, current season’s growth. 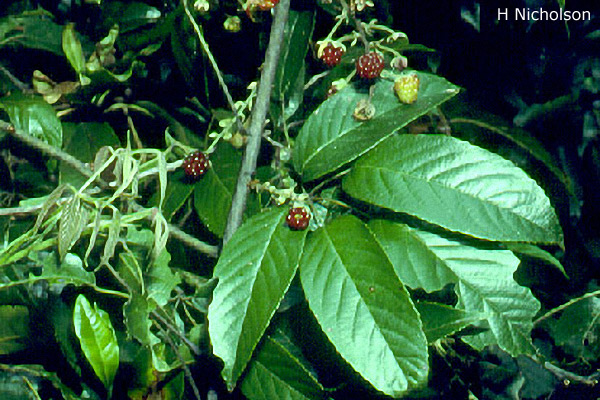