Like most of Australia’s members of the Ericaceae, Woollsia belongs to the subfamily Epacridoideae, which was formerly classified as a separate family, the Epacridaceae.

The genus Woollsia contains only the single species, W.pungens. It is an erect, open shrub usually less than 1 metre tall. The leaves are crowded along the stems and are ovate, up to 12 mm long by 4-6 mm wide, tapering to a sharp point. The flowers are usually white but light to dark pink flowered forms are known. They are tubular, up to 10-14 mm long with spreading and slightly wrinkled petal lobes and occur in a massed display along the branches from the leaf axils. Flowering occurs mainly in late winter and spring.

The species is not well known in cultivation but is cultivated by native plant enthusiasts. It is suited to temperate and sub-tropical areas in a well drained position in semi shade and should not be allowed to dry out. It is also a very attractive plant for a container.

Propagation of W.pungens is usually by cuttings of firm current season’s growth. Like most members of the Ericaceae, the roots are very fine and easily damaged during transplanting. Cuttings are probably best placed into individual small pots or tubes to minimise root disturbance. The species can be grown from seed but this is not readily available. 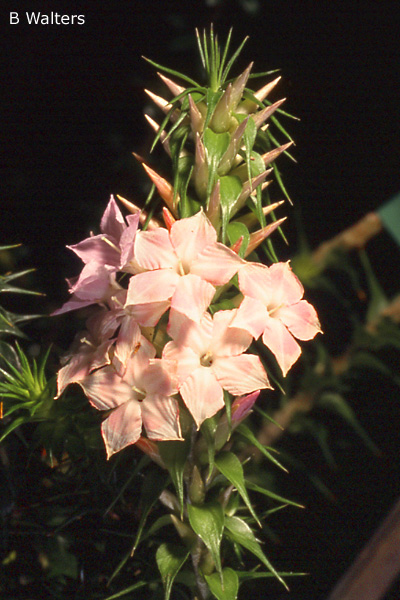