Acacia complanata is found on loamy and gravelly soils, often on low ridges. In south-east Queensland it occurs as an understorey shrub in open forest dominated by scribbly gum (Eucalyptus racemosa) or spotted gum (Corymbia citriodora). It will at times reach 5-6 metres in height, but is more usually a large, somewhat open shrub with slightly arching branches. Phyllodes are bright green, a typical leaf shape with several longitudinal veins, and end in a rounded tip. Stems are “winged” giving them a flattened appearance, with the flowers being the most attractive feature. They are large bright yellow balls, in dense or open groups, with a very light perfume which does not irritate. While flowering occurs mainly from late spring until autumn, this acacia will produce flowers at other times of the year. This has no connection with rainfall, as is sometimes thought. Seeds are not always produced after flowering.

A.complanata is an ideal suburban garden species, which can be pruned to the desired size. Due to the presence of a lignotuber, it regrows, in natural conditions, following fire or any damage by grading or bulldozing. If it is lightly pruned from the start, it will become a delightful shrub, rewarding the gardener with its lovely flowers several times a year, especially during summer, when wattles are not usually in flower. It is long-lived, up to 20 years or more, with apparently no attacks by borers (the bane of wattles!). At Redcliffe, north of Brisbane, member of the local SGAP branch, Don Perrin did most of the planning and planting of what is now the Redcliffe Botanic Gardens, where the plants are representative of species of south-east Queensland. A.complanata is fairly common in bushland between Brisbane and the Sunshine Coast, and the Redcliffe and District branch of SGAP promote it at every opportunity as the wattle for gardens in our region.

Propagation is relatively easy by normal seed raising methods following pretreatment by soaking in boiling water or by scarification. Propagation from cuttings is not usual. 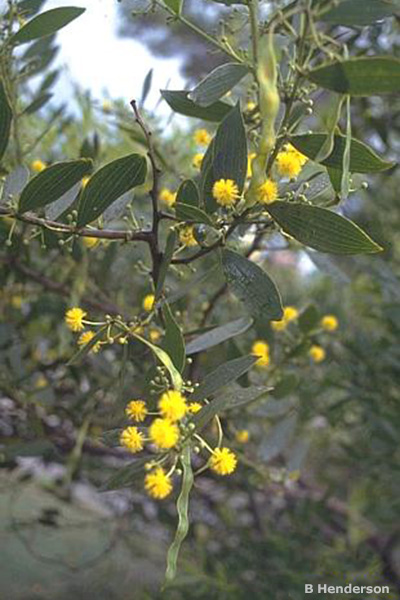