Acacia dealbata is a large shrub or medium-sized tree to about 30 metres high. It is one of those species which retain the fern-like, bipinnate foliage throughout their lives (in most other species, the bipinnate foliage is replaced by flattened stems called phyllodes). The pinnae (the divisions of the pinnate leaves) are up to 55 mm long and usually bluish-grey in colour. The plant has smooth, greyish green to dark grey bark which becomes fissured with age. The pale to bright yellow flower clusters are globular in shape and are produced terminally or in the leaf axils in late winter to mid-spring.

There are two subspecies recognised, subsp. dealbata and subsp. subalpina. The latter occurs mainly at higher altitudes, is generally smaller than subsp.dealbata (reaching 10 metres on occasions but usually smaller) and has smaller pinnae).

A.dealbata is well known in cultivation both in Australia and overseas (where it is known as ‘mimosa”). It is a hardy plant suitable for a wide range of climates and soils, provided they are reasonably well drained. It is probably too large for average-sized gardens but is ideal for parks and larger properties and for use as windbreaks. However, it should not be grown outside of its natural range because of its potential to naturalise and become weedy.

A prostrate form known as “Kambah Karpet” is in cultivation.

Propagation is relatively easy by normal seed raising methods following pretreatment by soaking in boiling water or by scarification. Cuttings may also be successful. 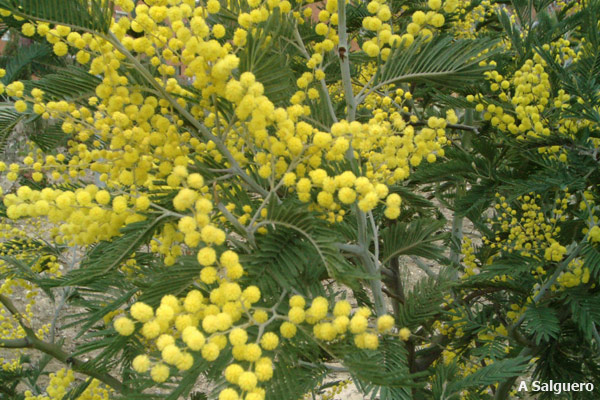