Acacia leprosa is a medium to tall shrub or small tree with an erect or weeping habit. Phyllodes are 30-140 mm in length, linear or lance-shaped to 25mm wide dotted with oil glands and with one or two prominent veins. They may be sticky when young. The flower clusters are globular in shape and in pairs (occasionally more) in the leaf axils. Flowers are generally lemon-yellow in colour but a recently discovered form from Victoria has deep pink flowers. This form has been released into the nursery trade as the cultivar “Scarlet Blaze”. Flowering occurs mainly in spring and the flowers are followed by flat seed pods about 50 mm long by 5 mm wide.

A.leprosa has been cultivated for many years and suitable forms make attractive garden plants for a well drained position in full sun to partial shade. Because of the variability of the species, selection of propagating material needs to be done with care. The species prefers climates with a dry (rather than humid) summer.

The cultivar “Scarlet Blaze” has attracted a good deal of attention because of the flower colour which is unique among the wattles. The cultivar arose from a single red-flowered specimen discovered by bushwalkers in a state forest north east of Melbourne. The original plant has since died. Further information on this cultivar can be found in this article from “Australian Plants online” and from the Australian National Botanic Gardens.

Propagation is relatively easy by normal seed raising methods following pretreatment by soaking in boiling water or by scarification. The species strikes reasonably well from cuttings of firm, current season’s growth. The cultivar ‘Scarlet Blaze’ needs to be propagated by cuttings as seedlings will not come true to type. 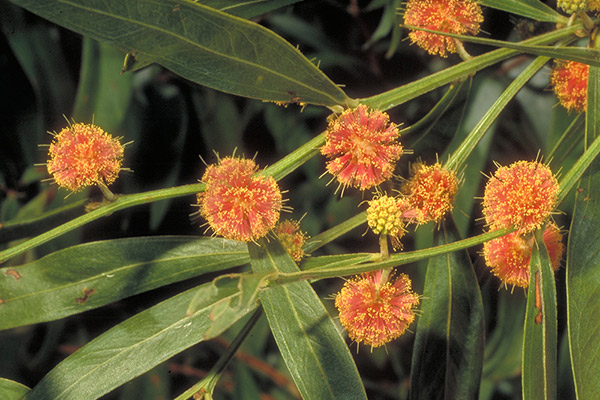