Acacia myrtifolia is usually a shrub from 1 to 2 metres high by a similar width but some almost prostrate forms exist. A reasonably distinctive feature is the reddish stems of the plant giving rise to the alternative common name ‘Red-stemmed wattle’. Like most members of the genus, the mature plant does not have true leaves but has leaf-like flattened stems called phyllodes. In A.myrtifoliathe phyllodes are elliptic and usually slightly curved. They are usually up to 50 mm long by about 25 mm wide with prominent veins along the margins and the midrib. The cream flower clusters are globular in shape and occur on short racemes from the leaf axils in spring.

A.myrtifolia was one of the earliest Australian plants brought into cultivation in Europe. It has been in cultivation in Australia for many years although it is not widely grown as many Acacia species with more colourful flowers exist. Despite this, its moderate size and attractive red stems and foliage would make it a worthwhile addition to most gardens – there may be more colourful wattles when in flower but A.myrtifolia has year-round attractions. It is hardy in most reasonably drained soils and can be lightly pruned following flowering to produce a busy growth habit. It prefers full sun and is tolerant of at least moderate frost.

Propagation is relatively easy by normal seed raising methods following pretreatment by soaking in boiling water or by scarification. Propagation from cuttings has also been successful. 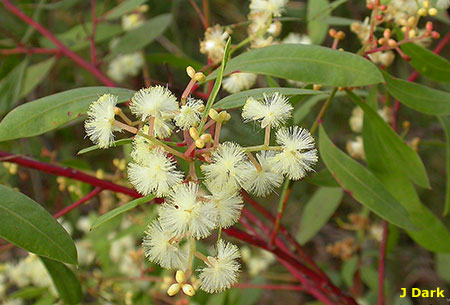