There has been some confusion about the identity of this species. In the past it was referred to as Oreocallis wickhamii (and it can still be found under that name in nurseries). However, it was found that the name Oreocallis wickhamii had been incorrectly applied to this species (O.wickhamii being a different, and much rarer, species). To further confuse the issue, research indicated that that Australian plants classified as Oreocallis were sufficiently different to Oreocallis species native to South America to justify transfer to a new genus, Alloxylon.

Alloxylon flammeum is now the accepted name for the tree waratah. In addition to A.flammeum, there are two other Australian species in the genus….A.wickhamii from north Queensland and A.pinnata from northern New South Wales and southern Queensland. A fourth species is found in Papua New Guinea.

The tree waratah is a tall tree to 25-30 metres in its native habitat but is much smaller in cultivation. The adult leaves are glossy green, elliptical and about 150 mm long by about 50 mm wide. Juvenile leaves may be much larger and may also be lobed. The flowers occur in clusters up to 75 mm in diameter and are conspicuously displayed in the leaf axils towards the ends of the branches. The flower colour is bright red and flowers are seen in spring and early summer.

A.flammeum is one of the most spectacular of all Australian native plants. Despite its tropical origin, tree waratah has been successfully cultivated in cooler districts at least as far south as Sydney where the plant flowers reliably.

Tree waratah is tolerant of a range of soils provided they are not waterlogged. It will even survive extended dry periods once established but flowering is reduced under these conditions. Established plants will withstand moderate frosts but heavy frosts can be expected to cause damage.

Propagation may be carried out from seed which is not, however, readily available. Plants also strike readily from cuttings of hardened new growth. 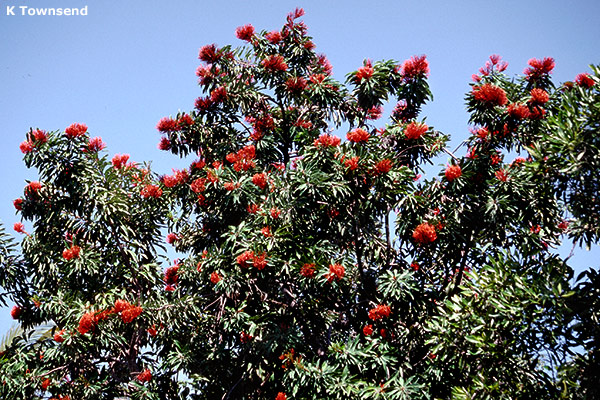 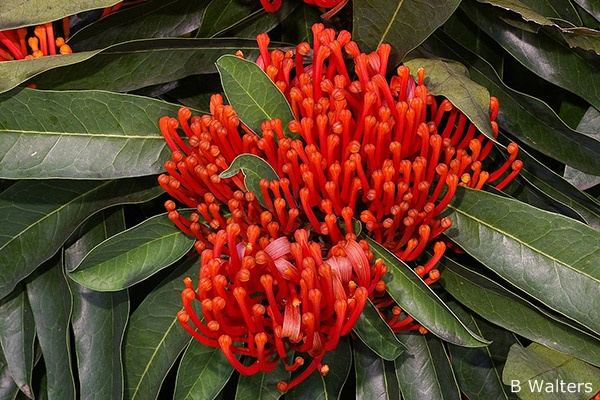