The genus Apium comprises about 20 species found in Europe, Asia, Africa, America and Australia. They are biennial or perennial plants growing wet areas. Some, like the common garden vegetable celery (Apium graveolens), are edible. There are two species native to Australia.

Apium prostratum is a biennial or perennial herb with broad or narrow divided leaves, similar to the common celery plant. It has a prostrate or upright habit reaching 0.5 to 1 metre high. Very small white or pink flowers occur in spring and summer. Several varieties are recognised.

Apium prostratum has received some attention from the ‘bush foods’ industry as it has a flavour similar to the common celery but with some evidence of parsley flavour. It was used as a celery substitute by the early European settlers. As far as is known, the plant is not in wide cultivation but it is apparently easily grown in a moist sunny position.

Propagation from seed is reported to be successful without any pretreatment although germination may take several weeks. 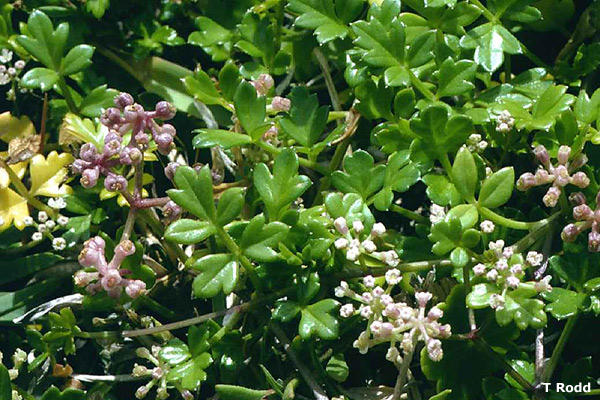