Araucaria is a genus of conifers consisting of about 18 species. There are three Australian members of the genus; A bidwillii (the bunya pine from south-east and northern Queensland) A.cunninghamii and A.heterophylla (the Norfolk Island pine). The latter is endemic to Norfolk Island but is widely planted in coastal areas throughout Australia.

Araucaria cunninghamii is a tall tree growing 30-50 metres in height, with a straight, rough-barked trunk with circular “hoop” markings which give rise to the common name. It is an emergent species in subtropical and tropical rainforest. The glossy green leaves are linear and about 100-150 mm long.

The hoop pine is widely cultivated in many areas and, despite it’s sub-tropical/tropical origins, is hardy in colder districts of Australia. It is quick growing and adapts to a range of soils. It also makes an attractive container plant when young, for both indoors and outdoors. The timber is valuable for a range of uses from building work to furniture making. It is widely grown in plantations for these purposes.

Propagation is generally carried from seed which germinates readily when fresh. Cuttings have also been successful but must be taken from upright growing shoots – cuttings from side shoots will not grow erect. 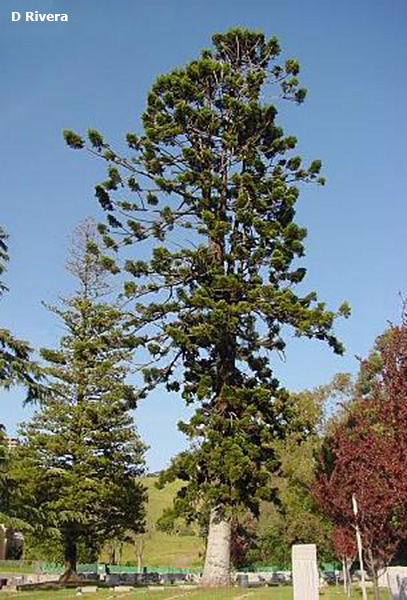