Banksia marginata is a very variable species both in habit and habitat. It is typically a medium shrub about 2 metres high by a similar spread but also occurs as a scrambling, prostrate plant and as a small to medium-sized tree. Leaves are linear, 15 to 60 mm long by 3 to 13 mm wide often with recurved (rolled under) margins. The leaf margins and tip may have small serrations. The upper surface of the leaves is dull green and the under surface is silvery, giving the plant its common name.

The flowers occur in cylindrical spikes which are 50 to 100mm long, 40 to 60mm wide and pale yellow in colour. The seeds are enclosed in follicles attached to a woody cone and are generally retained within the cone until burnt.

Fire-sensitive and fire resistant forms are known. The former rely solely on seed for regeneration while the latter can regenerate from both seed and from vegetative growth from a lignotuber.

Banksia marginata is common in cultivation and is generally hardy. However, due to the wide natural range of the species, forms for cultivation should be selected from similar climates to that of the location where it is to be grown. For example, in Sydney the forms selected from the coast and mountains of New South Wales are very successful while forms from drier areas (such as western Victoria) are difficult to maintain. In cultivation the species is not demanding in regard to soil types but waterlogged ground should be avoided. The plant favours a position in full sun or dappled shade.

A similar species is B.canei which is found in semi alpine areas of New South Wales and Victoria. 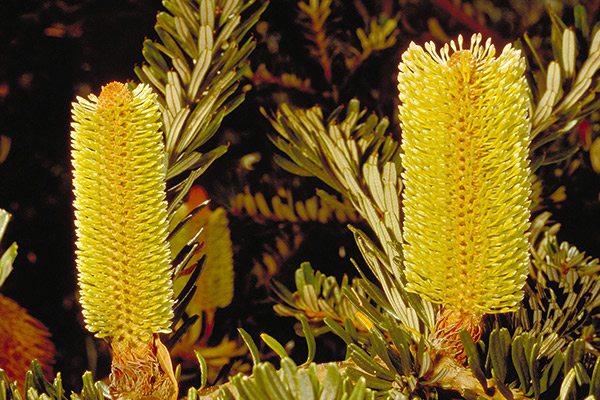