Banksia meisneri is a much branched shrub from 0.5 to about 2 metres high. The leaves are linear to narrowly elliptic and up to about 75 mm long. The obovoid inflorescences are seen in winter to spring and are about 5 cm wide at flowering, usually occurring on short lateral branchlets. They are a golden brown or rusty pink in colour with the pistals opening to cream and are often held within the foliage. Despite this, the flowers are quite conspicuous as the foliage is not excessively dense.

Two subspecies are recognised: subsp. ascendens has ascending leaves in contrast to the type form (subsp. meisneri) in which the leaves are reflexed downwards.

This species does not develop a lignotuber and is killed by fire. It relies on seed for regeneration.

B.meisneri is not often seen in cultivation. However, it is a particularly attractive small species that is suited to smaller gardens and should be tried in various areas to determine its suitability for cultivation. It is probably best suited to areas with a dry summer and may be difficult to maintain in humid areas such as the east coast of New South Wales and Queensland. It requires sandy, well drained soils in full sun or partial shade. It will tolerate pruning but not below existing foliage.

Propagation from seed is reliable without pre-treatment and cuttings also succeed but may be slow to strike and success rate may be well below 100%. 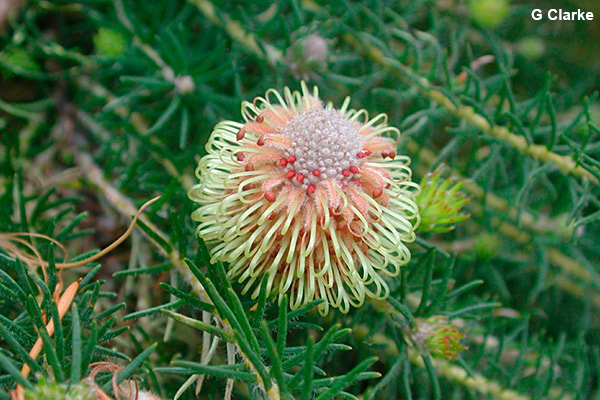