Banksia rosserae is a recently (2002) named species which was only discovered in 2000. It is a bushy shrub to about 3-5 metres tall with leaves that are broadly elliptical with toothed margins to about 50-120 mm long. In its natural habitat, B rosserae apparently only flowers after significant rain and may therefore not flower for several seasons during extended dry periods. It was observed in flower for the first time in June 2006. The obovoid inflorescences are unusual in that they are pendulous on short lateral branchlets, a feature shared by only a few other species (eg. B.aculeata, B.caleyi, B.lemanniana, B.nutans). The inflorescences are greenish-yellow to yellow in bud and, at maturity, are up to 50-60 mm in diameter and lemon-yellow in colour. The seeds are enclosed in follicles attached to a woody cone and are generally retained within the cone until burnt.

The species develops a lignotuber and is should be able to regenerate vegetatively after a fire, in addition to regeneration from seed.

Because of the scarcity of propagating material, Banksia rosserae has received only limited cultivation to date. It is a particularly attractive species that should be suitable for drier climates but will likely be difficult to maintain in humid areas such as the east coast of New South Wales and Queensland.

Propagation from seed is reported to be reliable either without pre-treatment or after treating with smoked water. Cuttings may be successful but have not been seriously tested at this stage. 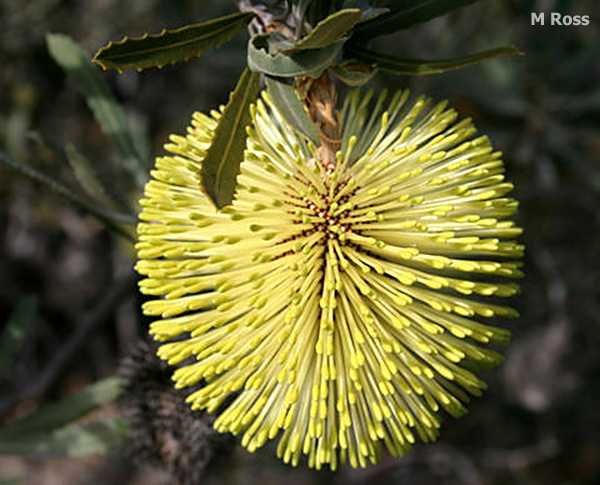