Bauera is a small genus of three shrubby species, all occurring in eastern Australia. Of these, Bauera rubioides is the best known as it has been in general cultivation for many years.

Two botanical varieties are recognised: var.rubioides and var.microphylla. The latter differs from the normal form in its smaller leaves and more scrambling habit. It also usually has white or very pale pink flowers.

B.rubioides is a small, bushy shrub between 0.3 and 1.5 metres in height. It has small leaves which are comprised of 3 leaflets closely attached to the stems. The leaves are about 50-100 mm long. The flowers appear mainly in spring but may often be seen at other times of the year. They are about 8-12 mm in diameter and occur on slender stalks (pedicels) from the leaf axils. The flower colour is usually deep to mid pink with a mass of yellow stamens in the centre – white forms are also common.

Although often regarded as one of the easiest Australian plants for gardens, B.rubioides can be short lived unless its specific needs are met. It performs best in moist, well drained soils, in sun or light shade.

Propagation is readily carried out from cuttings, preferably of hardened, current season’s growth. 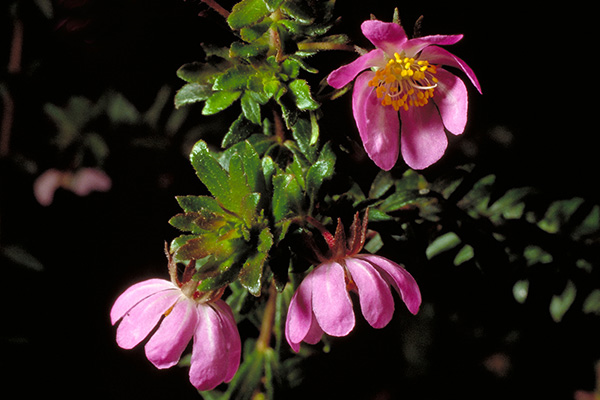