The genus Boronia is one of the best known of all Australian plants. There are approximately 95 species, all but one of which occur only in Australia. The majority of species are found in south-western Australia.

B.ovata is a small shrub usually less than 1 metre high. The leaves are elongated elliptical in shape to around 15 mm long. The flowers are 4-petalled of a star-like appearance and are pink in colour. They appear in spring and are about 10-15 mm in diameter, well displayed in clusters from the upper leaf axils and occur from mid winter to late spring although some flowers may be present at other times.

This species is much hardier than many other boronias in the garden and will succeed in well drained soils, preferably in semi shade. It seems to be reasonably tolerant of dry conditions once established and is tolerant of at least moderate frost. It is also very suitable for growing in a container.

In common with most members of the Rutaceae, propagation of B.ovata from seed is difficult but cuttings usually strike readily from current season’s growth. 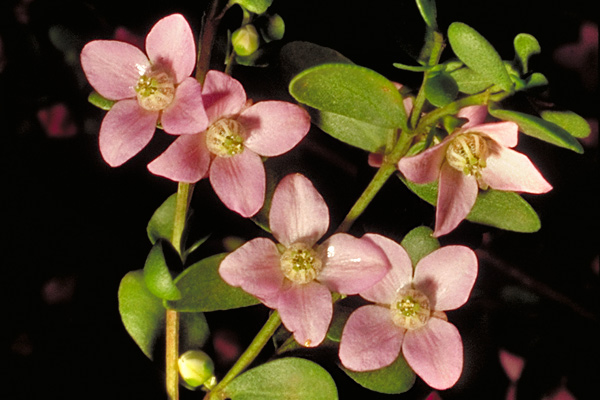