Bossiaea is a genus of about 50 species all of which occur naturally only in Australia. They are found in all States and are small to medium shrubs.

Bossiaea ensata is a small shrub, often with a low, spreading habit and only rarely reaching about 1 metre high. It is generally leafless and has flattened, winged stems whose function takes the place of leaves (the leaves are actually reduced to small scales along the flattened stems). The stems are usually 3 to 10 mm in width (which distinguishes B.ensata from the similar B.scolopendria, which has winged stems up to 15 mm wide).

The flowers are yellow with a red centre and have the typical “pea” shape consisting of 4 petals; the “standard”, the “keel” and two “wings”, as shown in the diagram. They occur in the leaf “scales” in late spring and summer and are about 10-15 mm long. The flowers are followed by small, oblong seed pods about 25-40 mm long.

Bossiaea ensata is not often cultivated but is sometimes grown by Australian plant enthusiasts. It is regarded as a reasonably hardy species for sunny or semi-shaded sites in well drained soils. It tolerates at least moderate frost and responds to pruning to produce a more densely foliaged plant. 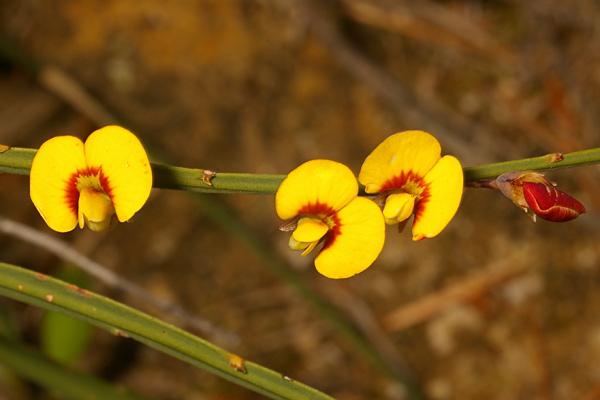