Bossiaea is a genus of about 50 species all of which occur naturally only in Australia. They are found in all States and are small to medium shrubs. Bossiaea rhombifolia was previously divided into two subspecies but B. rhombifolia subsp. concolor is now regarded as a separate species, B. concolor, which is usually found further inland than B.rhombifolia and extends further north into Queensland.

Bossiaea rhombifolia is a small to medium shrub which may reach 2 metres in height. The greyish-green leaves are oval or rhomboid in shape to about 10mm long on stems that are often flattened.

The flowers are yellow with a red centre and have the typical “pea” shape consisting of 4 petals; the “standard”, the “keel” and two “wings”, as shown in the diagram. They occur on 5 mm long stalks from the leaf axils in spring and are about 10-15 mm long. The flowers are followed by small, oblong seed pods about 10-20 mm long.

Bossiaeas are rarely seen in cultivation and Bossiaea rhombifolia is no exception. It is a very attractive species in both flower and foliage and would enhance any native garden.

It is a reasonably hardy species for sunny or semi-shaded sites in well drained soils. It tolerates at least moderate frost and responds to pruning to produce a more densely foliaged plant. 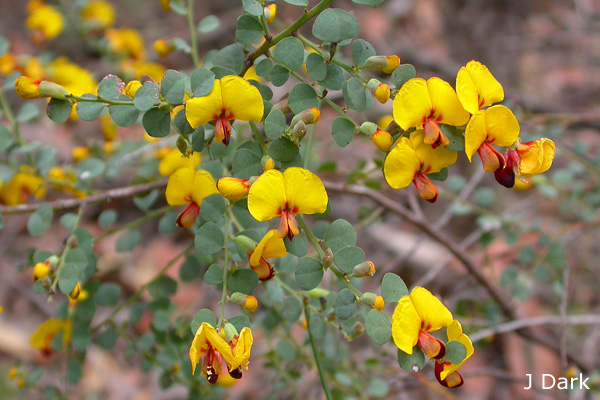