Brachychiton is a genus of 30 or more species, most of which occur in tropical parts of Australia in dry areas or in rainforest. They are large shrubs or trees. Illawarra flame tree is the most commonly cultivated species due to its spectacular crimson flowers. The Kurrajong (B.populneus) is one of the most widely distributed and is also a common tree in cultivation.

B.acerifolius is a small to medium sized tree which may reach 30-35 metres in height although it is usually much smaller in cultivation in cooler areas. Leaves are about 250 mm long and may have entire margins or be deeply lobed. The bell-shaped flowers occur in clusters at the ends of the branches. The flowers are followed by large, leathery seed capsules which contain many corn-like seeds.

B.acerifolius is generally deciduous before flowers are seen in early summer. However, the deciduous nature of the plant is variable; in some seasons foliage will be retained on all or part of the tree. In a “good year” the Illawarra flame tree is arguably the most spectacular of all Australia’s native trees. Flowering may take around 5-8 years from seed. The tree is hardy in a wide range of soils and is suited for temperate to tropical areas.

Propagation from seed is relatively easy without any pretreatment. The seeds are surrounded in the capsule by irritant hairs and are best collected using gloves. Grafting is also relatively easy and by using scions of mature material from good flowering forms, plants will flower much earlier than those grown from seed. Seedlings of B.acerifolius, B.populneus and B.discolor have been successfull used as grafting stocks. 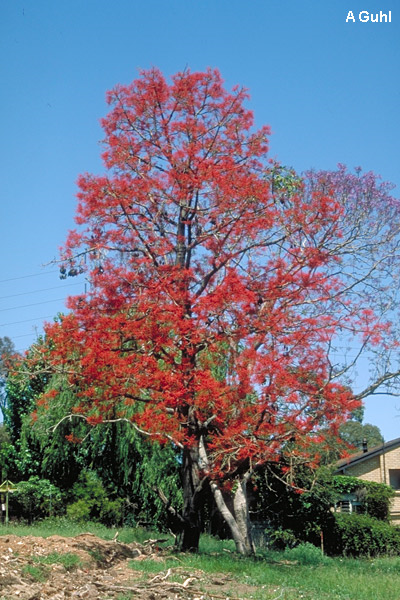