Brachychiton is a genus of 30 or more species, most of which occur in tropical parts of Australia in dry areas or in rainforest. They are large shrubs or trees.

Brachychiton bidwillii is a highly variable species which may sometimes develop as a small tree on a single stem reaching 4-5 metres with a spread of 4 metres or so. However, other forms may be little over two metres tall. The Southern Queensland forms usually have deeply-lobed leaves, while the ‘Maroochydore’ form has very hairy, 5-lobed leaves which are purple-brown when young. This form has pink flowers of a different shape from all others, with a long tube. The largest flowers in the species are found in some plants from the northern inland (Leichhardt form).

On the coast near Bowen is the completely different ‘Northern Coastal’ form, with deeply 5-lobed leaves, and smallish, bright red unfading flowers. It has a short but spectacular spring flowering period of 4-6 weeks. The Leichhardt forms flower for 3 months starting in mid-spring in cold years. In years with no frosts they can flower from July to February.

Most forms of B.bidwillii drop their leaves before flowering. As the plants age, flower production increases, and after 8 years or so they may produce bunches of up to 50 flowers coming directly from the trunk, as well as the usual flowers on twigs and branches.

Little Kurrajong is an underrated species in cultivation. The best forms are among the most beautiful of native shrubs and are prized for their flowers. Unfortunately, the plants most often grown in gardens are the southern Queensland forms, with relatively small flowers and a short flowering period. Like other brachychitons, B.bidwillii tolerates a wide range of soil types provided they are well drained. All flower best in full sun, despite being ‘dry rainforest’ plants.

All forms are frost-resistant to at least -6 degrees C and are drought-tolerant from a very early age (little over a month), as they form tuberous roots at the same time as their first true leaves. All forms respond well to pruning.

Two popular clones are fairly widely propagated by grafting in south-east Queensland. They are known as ‘Large Pink’ (or ‘Beau Bells’) and ‘Large Red’ respectively. The former is a deep pink, and the latter a clear bright red which fades to pink after a day or two. Both have leaves which are lobed only slightly, if at all.

Propagation from seed is relatively easy without any pretreatment. The seeds are surrounded in the capsule by irritant hairs and are best collected using gloves. The species usually takes about 3 years to flower from seed. Grafting is also relatively easy, and by using scions of mature material from good flowering forms, plants will flower much earlier than those grown from seed. Seedlings of B.acerifolius, B.populneus and B.discolor have been successful used as grafting stocks. 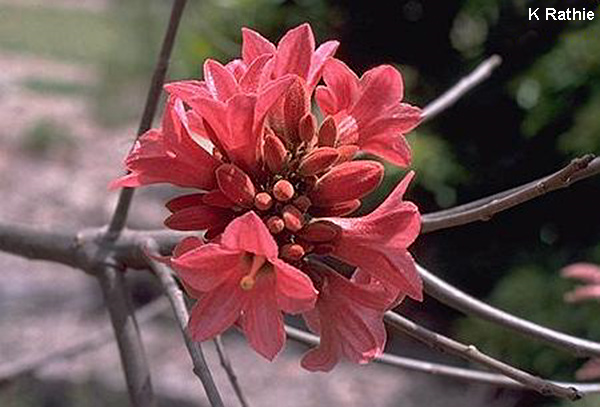