Calamphoreus is a genus of a single species, closely related to Eremophila. C.inflatus was formerly known as Eremophila inflata.

Calamphoreus inflatus is an erect, spreading shrub to about 1.5 metres high by 2 metres width. The leaves are up to 30 mm long and linear or narrowly lance-shaped. The flowers are usually pink to mauve but purple or green colours may also be seen. The flowers are about 10 mm long and have a very inflated appearance, quite unlike the related eremophilas. They are shortly tubular and are usually seen in summer. The oval-shaped fruits are about 3 mm long and beaked at the tip.

C.inflatus is well known in cultivation (as Eremophila inflata) and grows well in dry climates on a variety of soils which must have good drainage. It has also been successfully cultivated in humid, temperate areas. The species will tolerate at least moderate frosts and prefers full sun. The plant can be pruned fairly heavily if required.

Propagation from seed is unreliable but methods used for Eremophila species would be worth considering. These include sowing the ripe fruits, sowing of aged and washed fruits and splitting the fruits to extract the seeds prior to sowing. The latter involves splitting the fruits in halves and quarters but some seeds are inevitably damaged during the process. 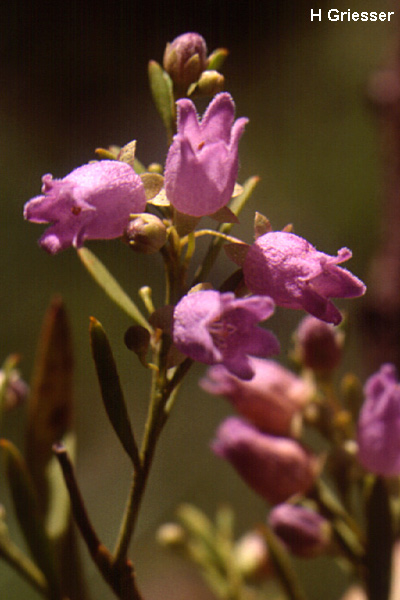