There is ongoing controversy about whether Melaleuca or Callistemon should be used for the bottlebrush species – see footnote box). Some herbaria have now adopted the name Melaleuca to include Callistemon species, however, this reclassification has not been adopted in the Australian Plant Census (which is accepted by ANPSA as the authority on Australian Plant nomenclature).

This cultivar is a free flowering plant growing to around 1.5-2 metres in height by a similar spread. The leaves are elliptical to about 30mm long, tapering to an acute point. The typical bottlebrush flowers are deep-red with yellow tipped stamens. Flowering occurs in spring.

Although of tropical origin, C.”Hinchinbrook” is a hardy and adaptable garden plant in sub-tropical and temperate climates. Its massed flowering and growth habit make it suitable to smaller gardens. It tends to grow with a bushy habit but can be pruned fairly hard to promote busy growth if needed. Like most callistemons, it prefers a sunny position in the garden and can tolerate less than perfect drainage but best performance will be obtained in gardens with reasonable drainage and regular availability of water. Callistemons respond to well to annual fertilising after flowering and are not as sensitive as some other Australian plants to phosphorus.

The plant produces viable seed but is best grown from cuttings to ensure that the resultant plants maintain the same characteristics as the original. Cuttings strike readily from firm, current season’s growth. 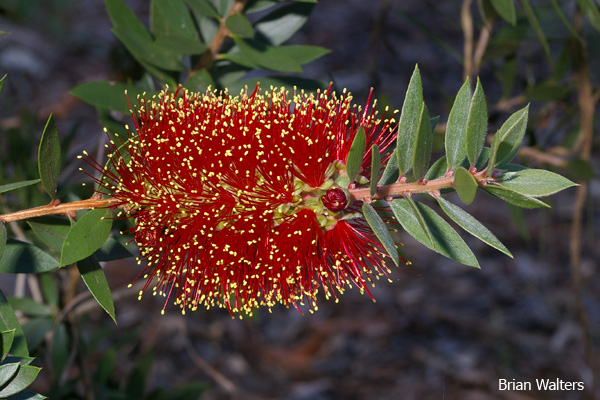