Callistemon quercinus is well known in cultivation under the name Callistemon ‘Injune’. It was named Melaleuca phratra by Lyn Craven in 2009 but recent work by Tony Bean of the Queensland Herbarium indicated that the species would be more correctly placed in Melaleuca quercina, which was also named in 2009 by Craven (note we have adopted the name Callistemon quercinus on this site in accordance with the Australian Plant Census as there is ongoing controversy about whether Melaleuca or Callistemon should be used for the bottlebrush species – see footnote box).

C. quercinus is a tall shrub to small tree with a weeping growth habit, usually up to 2-4 metres high. It has narrow lance-shaped leaves to about 7 cm in length. The pale pink bottlebrush-shaped flowers occur mainly in spring but a second flush in late summer/autumn is not unusual. The flowers fade to white as they age. This species has become very popular in cultivation as an attractive and hardy shrub for a wide range of soils and climates. It prefers a sunny position and moist soils and is tolerent of at least moderate frost. It withstands extended dry conditions once established. Like other callistemons, it responds well to annual fertilising after flowering.

Like most callistemons, C. quercinus produces viable seed which germinates easily. However, as it is unclear whether this plant is a hybrid or not, any plants produced from this seed may not be identical to the parent plant. For reliable results, the plant should be propagated by cuttings which strike easily from firm, current seasons growth. 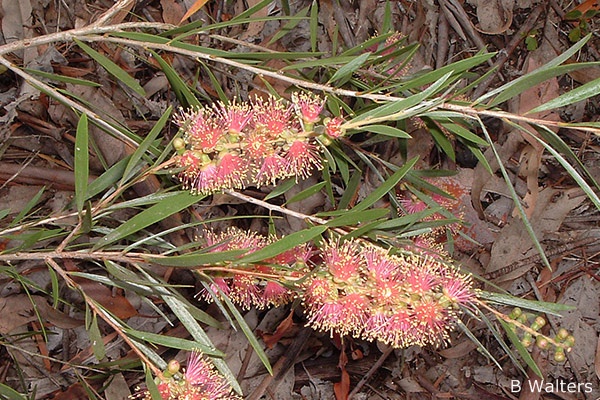