The genus was named by Jacques Labillardiere in 1806 when he published the description for C.sanguineus.

Several members of the genus are called “claw-flowers” because of the claw-like shape of the stamen bundles. The name ‘net bush’ is also used for some species because the long stamens on the one-sided flower clusters resemble a net but this name is not officially recognized.

C.quadrifidus was named by Robert Brown who collected it when he visited Lucky Bay near Esperance during the Flinders expedition in January 1802. Brown collected three species. Two of them had the flower parts in fives (C.gracilis and C.villosus). The third had flower parts in fours, and so he naturally named it after this (apparently) unusual character. He was not to know that most species in the genus also have this character.

C.quadrifidus is known as ‘one-sided-bottlebrush’ because the red, brush-like flowers are on one side of the stem. It is very widespread in Western Australia and includes a good deal of variation. The species is currently (2004) being reviewed and may be split into some new species.

It is the most widely cultivated member of the genus and, despite its natural habitat in a dry summer climate, it has proven adaptable to more humid areas . A common form is a shrub to about 2.5 metres high by a similar width. The leaves are linear, about 30 mm long and 1-2 mm wide. Flowers occur in one-sided clusters in spring and are usually bright red but yellowish forms are known. Flowers are followed by woody seed capsules which retain the seed for many years. In Western Australia, other forms are available including a ground hugging form.

This species is an attractive shrub for a sunny position in well drained soils. The flowers contain nectar and are attractive to honey eating birds. It can become sparsely foliaged with age but responds to hard pruning and will tolerate extended dry periods once established. 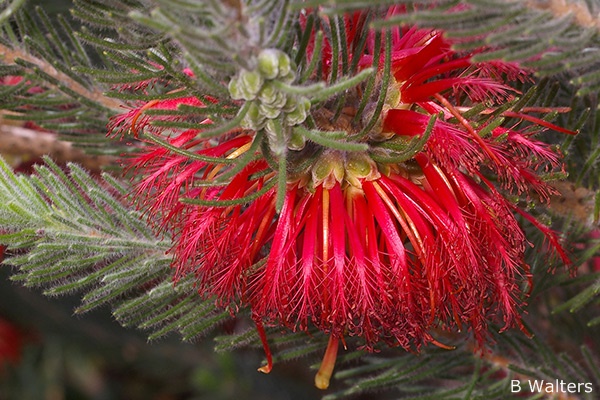