The genus Capparis is well known through the exotic species C.spinosa. The pickled buds of that species are “capers” which are widely used as a food flavouring. There are about 250 species in the genus with approximately 16 native to Australia. The fruits of many of the species were important to Aborigines as a food.

Capparis lasiantha is usually a small to medium shrub (sometimes a climber) up to about 3 metres high. The leaves are dark green and oblong in shape to about 50 mm long. The white flowers usually occur in late summer and autumn and are about 25 mm in diameter with long, spreading stamens. The flowers have silky hairs and are followed by orange fruits. The fruit is edible and the nectar from the flowers was also used to treat colds by some Aboriginal groups.

As with other Australian Capparis species, C.lasiantha is not widely cultivated but should be suitable for inland gardens in tropical and sub-tropical climates. It is very floriferous and withstands drought. Plants are reported to become straggly unless pruned. The species is unlikely to be suited to humid, summer rainfall areas.

Plants can be propagated from seed which does not require any pretreatment and may also be grown from cuttings. 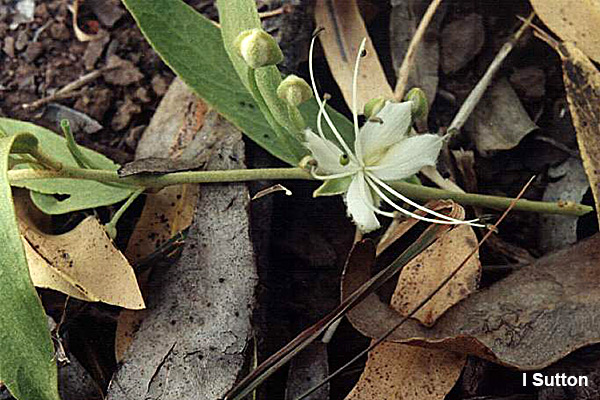