The genus Capparis is well known through the exotic species C.spinosa. The pickled buds of that species are “capers” which are widely used as a food flavouring. There are about 250 species in the genus with approximately 16 native to Australia. The fruits of many of the species were important to Aborigines as a food.

C.mitchellii is widespread in mainland Australia and is usually a large shrub or small tree which can reach 10 metres in height. The foliage is grey-green with leaves oval-shaped to about 50mm long x 25 mm wide. The white flowers can be seen at many times of the year; they occur on peduncles (stalks) about 40 mm long and are about 50 mm in diameter with long, spreading stamens. The flowers are followed by purplish or orange fruits about 70 mm in diameter (the photograph shows an greenish, immature fruit). The fruit is edible.

This species is not widely cultivated but should be suitable for gardens in dry climates. It is reported to tolerate a range of well-drained soils and will grow in alkaline soils. C.mitchellii is unlikely to be suited to humid, summer rainfall areas.

Plants can be propagated from seed which does not require any pretreatment and may also be grown from cuttings. 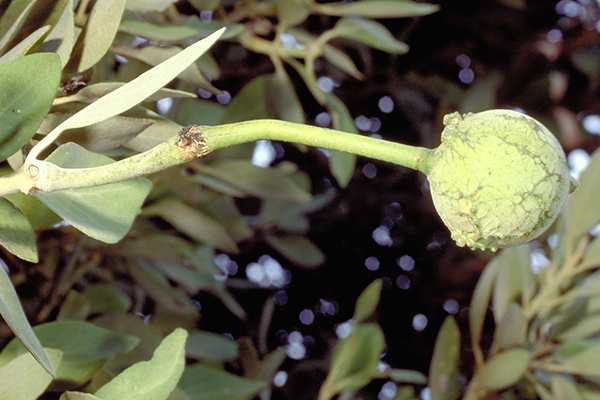