Chrysocephalum apiculatum is a very variable species which is not surprising given its very extensive distribution. It is usually a small, spreading perennial or shrub up to about 0.3 metres high by 0.5 to 1.5 metres in width. Some forms spread by suckering. The linear or lance-shaped leaves are often silvery or greyish in appearance due to the presence of dense hairs and may be between 10 and 60 mm in length by about 5 – 15 mm wide. The bright yellow flower heads appear in clusters at the ends of the stems, mainly during summer and autumn but it is not unusual to see flowers at other times of the year. Individual flower heads are up to 15 mm in diameter.

Common everlasting has been in cultivation for many years and numerous named forms are available from specialist nurseries and/or enthusiasts. Because of the wide range of the species it is difficult to generalise about growing conditions or hardiness under garden conditions. However, good drainage and a sunny position seem to be mandatory. Most forms are suitable for growing in containers.

Propagation from seed can be carried out without any pretreatment but cuttings usually give more reliable results. Named forms should only be propagated from cuttings as seed is unlikely to produce plants true to type. 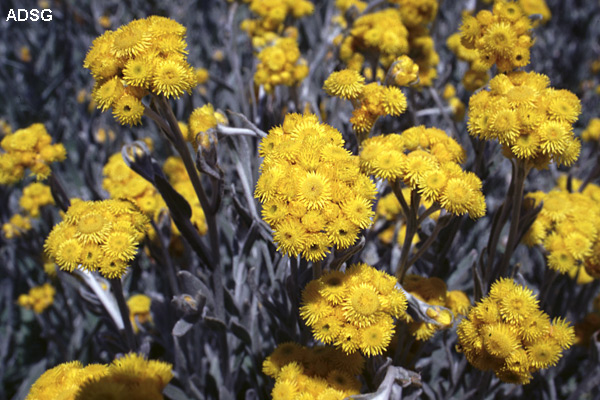