The Desert Lime was formerly known as Eremocitrus glauca but has undergone botanical revision and has been reunited with the genus Citrus. Details of the revision are in:

Citrus glauca is a medium shrub or small tree generally 3-7 metres in height. It is confined to inland areas, usually on heavy, clay soils. The foliage is greenish-grey, with oblong leaves up to 50mm long by 5 mm wide. The stems are spiny with irregularly spaced thorns. Flowers are 10 mm across, white or greenish in colour and appear in late winter and spring. The flowers are followed by greenish/yellow fruits which are globular in shape and about 15 mm diameter. The fruits are edible and have a strong citrus flavour which is widely sought by “bush tucker” enthusiasts.

Because of its habitat, C glauca is of interest as a grafting rootstock to possibly extend the range of commercial citrus crops. There is also potential for breeding to develop new citrus varieties.

Desert lime is not widely cultivated as it is generally unsuited to the wetter climates of the major population centres. It can be cultivated successfully in inland areas. The plant has a suckering habit which may need to be controlled in cultivation.

Propagation is possible from seed but cuttings may be slow to strike. Grafting or budding onto other citrus stocks has apparently been successful. 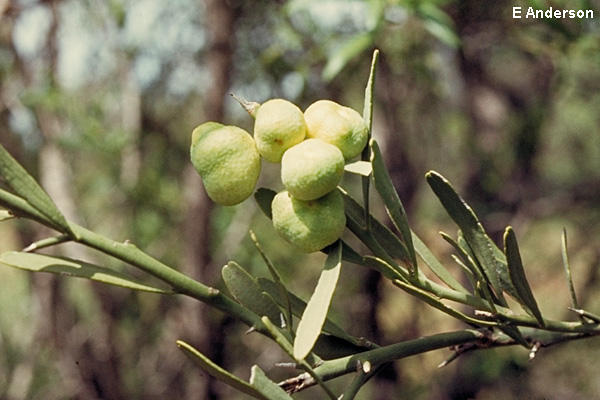