Clematis is a genus which is well known in cultivation with a number of exotic species and cultivars being widely grown in many parts of the world. They are usually climbing plants with well over 200 species occurring in many countries. There are about 6 or 7 Australian species.

Clematis aristata is one of the best known of the Australian species and is conspicuous in east coast forests, particularly after flowering when the distinctive, fluffy seed heads are seen. The plants are dioecious (ie.there are separate male and female plants). The species is a reasonably vigorous “leaf climber” having leaf stems which coil around the branches of other plants (or around its own branches), thus enabling it to climb. Apart from the typical form of C.aristata there are 3 other recognised varieties:

The adult leaves are usually trifoliate; each leaflet being ovate and up to 75 mm long, often with toothed margins. Seedling leaves are purplish in colour. The starry, white to cream flowers are relatively large (30-70 mm diameter) and have no petals but have 4 petal-like sepals. The male and female flowers are similar. The flowers are followed (on the female plants) by the fluffy seed heads which give rise to the common name.

C.aristata is a popular garden plant which is hardy in most soils. It prefers a sunny or semi shaded position and will withstand heavy pruning. It is vigorous but is unlikely to become a problem by smothering other plants.

Propagation can be carried out from fresh seed and from cuttings. 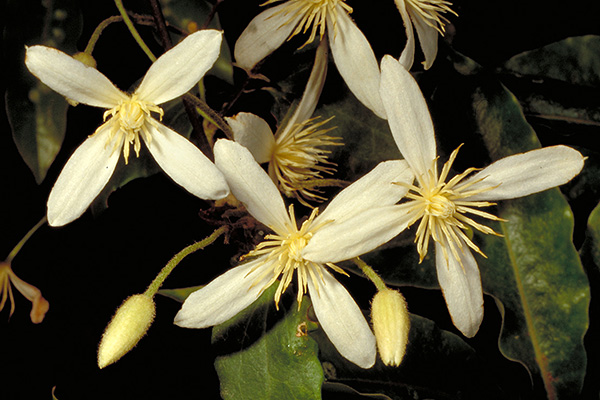