Commersonia is a genus of about 25 species being found in Australia as well as South-East Asia and the Pacific. There are about 20 species in Australia, occurring in all mainland states and territories. A revision of the genus in 2011 transferred a number of species from Rulingia to Commersonia, including this species which was previously known as Rulingia hermanniifolia. As it is a commonly cultivated plant, it will still be seen under its previous name in nurseries.

Commersonia hermanniifolia is a prostrate or trailing shrub which spreads to about 1-1.5 metres. The leaves are oblong to lance-shaped, 5 – 20 mm long and often lobed lobed with recurved margins. The upper surface is strongly wrinkled and the under surface is hairy. The small, starry flowers are white, aging to pale pink, and occur in spring.

Commersonia hermanniifolia is a popular plant and has been in cultivation for many years. It has proven to be hardy in a range of climates in most reasonably drained soils and is tolerant of at least moderate frost. In full sun it provides a dense ground cover – in shadier areas the foliage may be more sparse.

Propagation can be carried out from seed which does not require pre-treatment. Cuttings of hardened, current season’s growth also strike readily. 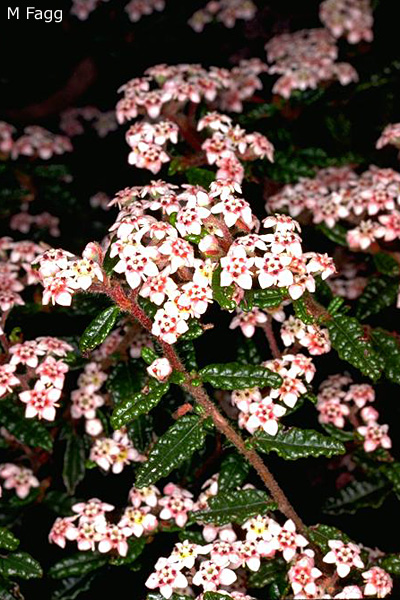