Conostylis is a genus of 40 or more species and is closely related to the better-known kangaroo paws (Anigozanthos sp). They are perennial herbs consisting of strap-like leaves sometimes arising from underground rhizomes. Flowers usually occur in clusters on stalks which emerge from the bases of the leaves. All species occur naturally only in the southern areas of Western Australia.

Conostylis candicans has a wide natural distribution and is one of the best known members of the genus. It has been widely grown by Australian plant enthusiasts but is not common in general cultivation. It is a variable species but usually forms a clump of narrow, greyish foliage to about 300mm in height by a spread of about half a metre. The foliage is narrow and greyish is colour. Flowers are yellow and occur in clusters on stems about the same length as the leaves. Flowering occurs in winter through to summer.

This species has been grown successfully in a range of climates but is not generally suited to tropical areas. It requires excellent drainage and a sunny position and is tolerant of moderate frosts. It can withstand extented dry periods once established but flowers may abort under these conditions.

Propagation can be carried out from seed but often germination is spasmodic. Propagation can also be carried out by division of the clumps but this is not as easy as with the related kangaroo paws. Divisions are best potted up and placed in a sheltered location such as in a glasshouse or cold frame until the plant re-establishes its root system. 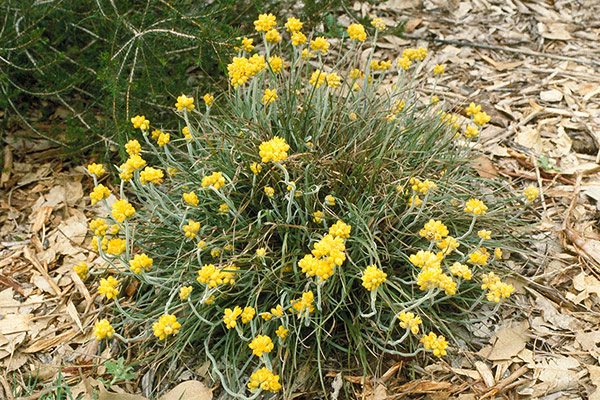