Correa alba is small shrub to about 1.5 metres in height by a similar width. Leaves are oval shaped, greyish in colour with the undersurface covered with short hairs. They are 15 to 30 mm long by 10-30 mm wide. The white flowers occur from the leaf axils and are about 12 mm in diameter. Unlike other Correa species, the flowers are not in a bell shaped tube but are more open (the floral tube is split to give a star-like shape to the flowers). A pink form of unknown origin exists. Flowering occurs mainly in late autumn and winter but occasional flowers will be seen at other times.

This is one of the hardiest of Australian native plants being successful in most reasonably drained soils in full sun or semi shade. It is very resistant to salt spray and is tolerant of at least moderate frosts. Once established it is tolerant of extended dry periods.

In common with most members of the Rutaceae, propagation of C.alba from seed is difficult but cuttings usually strike readily from current season’s growth. 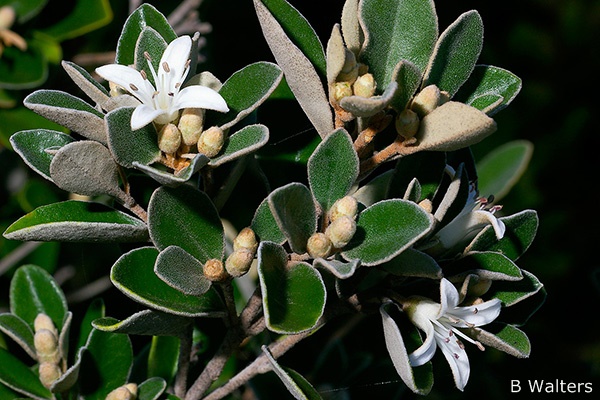