Correa baeuerlenii is a small to medium shrub, rarely exceeding about 1 metre in cultivation. It has glossy green leaves which have a red stem. The flowers are typical of most Correa species in being bell-shaped and about 20-30 mm long. The bells are comprised of 4 petals fused together into a tube. There are 8 stamens which extend beyond the end of the bell. Flowers are greenish-yellow in colour and have a distinctively shaped calyx at the base which gives rise to the common name of the plant. Flowering is in autumn through to late winter.

This species is one of the hardiest of correas for the garden. It grows best in a protected position with some shade, good drainage and a reasonable supply of water. Once established, the plant will tolerate extended dry periods. Most correas are attractive to honey eating birds and C.baeuerlenii is no exception.

Propagation of C.baeuerlenii is difficult from seed but usually presents no difficulty from cuttings. 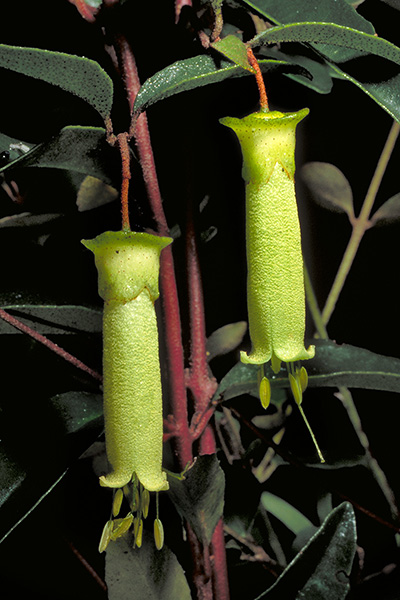