Cryptandra is a genus of about 40 species occurring in southern Australia in both eastern and western states. They are all low growing, shrubby species with small, usually white, flowers. Very few species are in cultivation.

Cryptandra ericoides (also referred to as C.ericifolia in some texts) is a small, twiggy plant which is widespread in heath areas. It is a fairly inconspicuous plant and usually goes unnoticed when not in flower. It grows to about 0.5 metres high by a similar width but is often smaller. Leaves are very small, usually rounded in cross section (terete) and up to 75 mm long. The white, tubular flowers are seen in autumn and early winter and usually occur in clusters at the ends of the branches. When in flower, the plant can easily be mistaken for a member of the Epacridaceae.

C.ericoides is not cultivated to any great extent. It is likely to require a sunny or lightly shaded position in moist, well drained soils. It would be best grown in a rockery or similar location rather than in a general shrubbery where it would be easily overwhelmed by more vigorous plants.

As seed of Cryptandra species is rarely available, propagation would be best carried out from cuttings of firm, current season’s growth. However, cuttings are likely to be slow to strike. 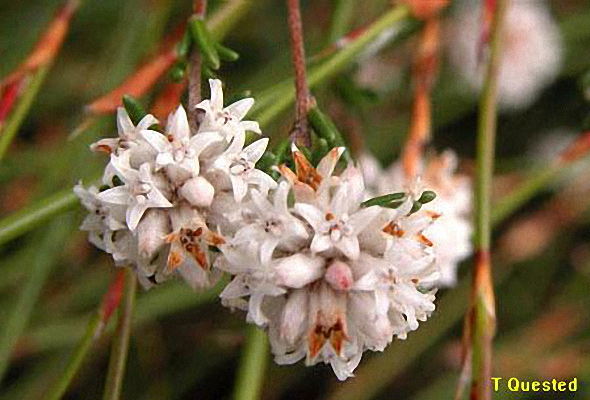