Darwinia squarrosa is one of several species of Darwinia from south-Western Australia known collectively as “Mountain Bells”. Other species in this group include D.leijostyla, D.macrostegia, D.meeboldii and D.oxylepis. Like other members of the group, the 6 or 7 small flowers are enclosed within large bracts which give the bell shape. Thus the “flower” is really a cluster of small flowers enclosed within a “bell” up to 20mm long.

The species is a small shrub which may reach about 1 metre high by a similar width. The leaves are oblong to oval in shape and around 8 mm long. The bell-shaped bracts are usually bright pink. They occur in spring and are prominently displayed on the ends of the branches.

D.squarrosa is reasonably well known in cultivation, however, like other mountain bells it has proved to be a difficult species to maintain for a long period, particularly in areas with a humid summer. It requires excellent drainage and would probably benefit from some protection from direct summer sun. This species has been successfully cultivated at Santa Cruz Arboretum in California, USA.

Seed of Darwinia species, generally, is not easy to germinate. The species can, however, be grown fairly easily from cuttings. Grafting of this and other darwinias species onto the hardy D.citriodora has been very successful and this is the preferred method of propagation in areas where the plant is difficult to maintain. 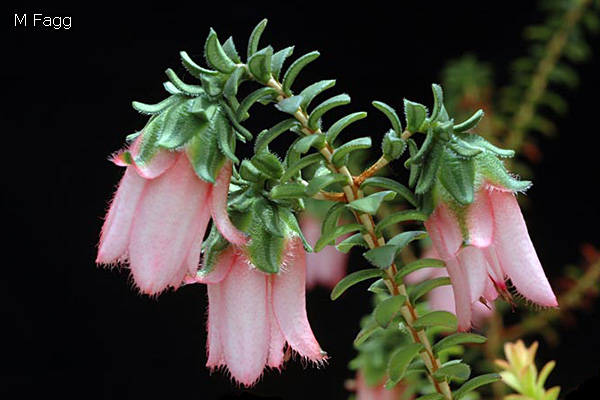